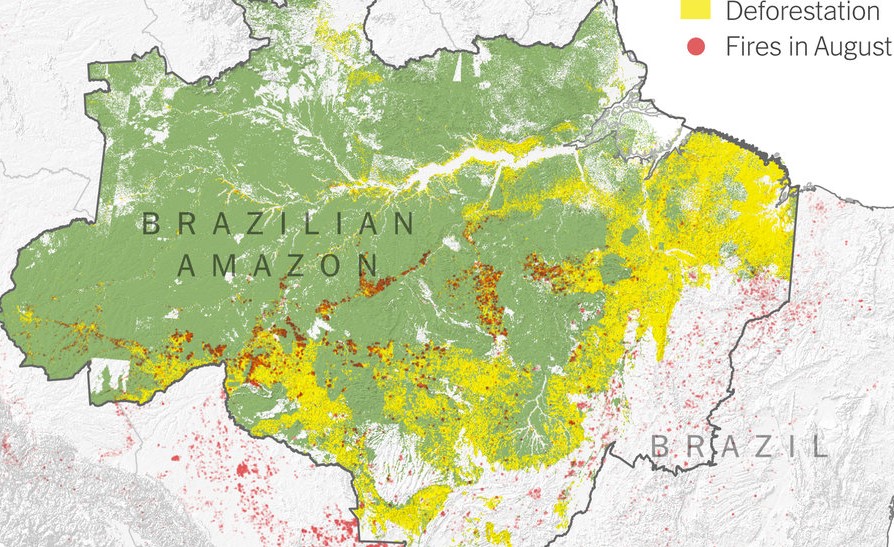 Scientists studying satellite image data from the fires in the Amazon rain forest said that most of the fires are burning on agricultural land where the forest had already been cleared.

Most of the fires were likely set by farmers preparing the land for next year’s planting, a common agricultural practice, said the scientists from the University of Maryland. 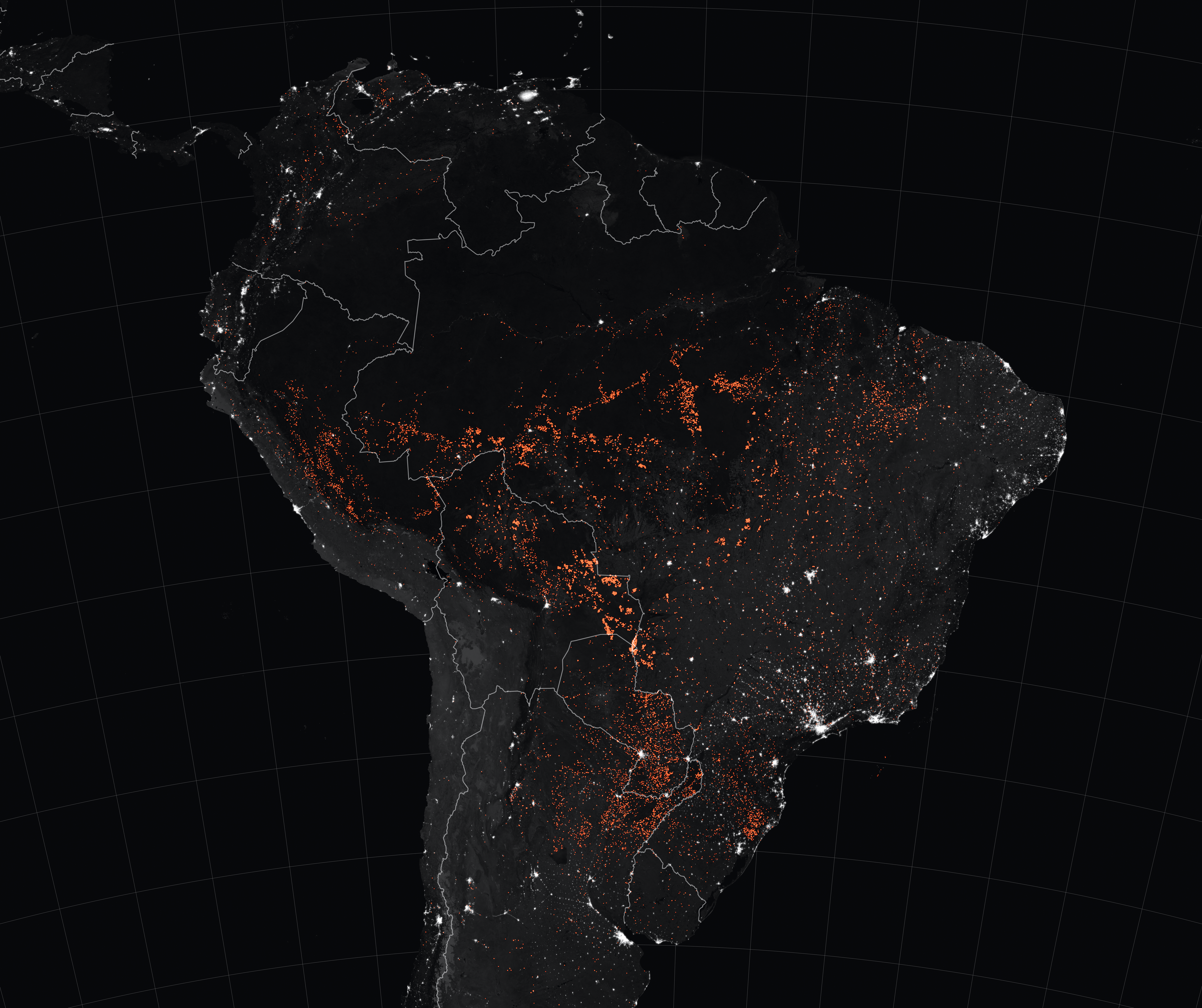 Satellite images like the one below show smoke plumes from fires emanating from agricultural areas. 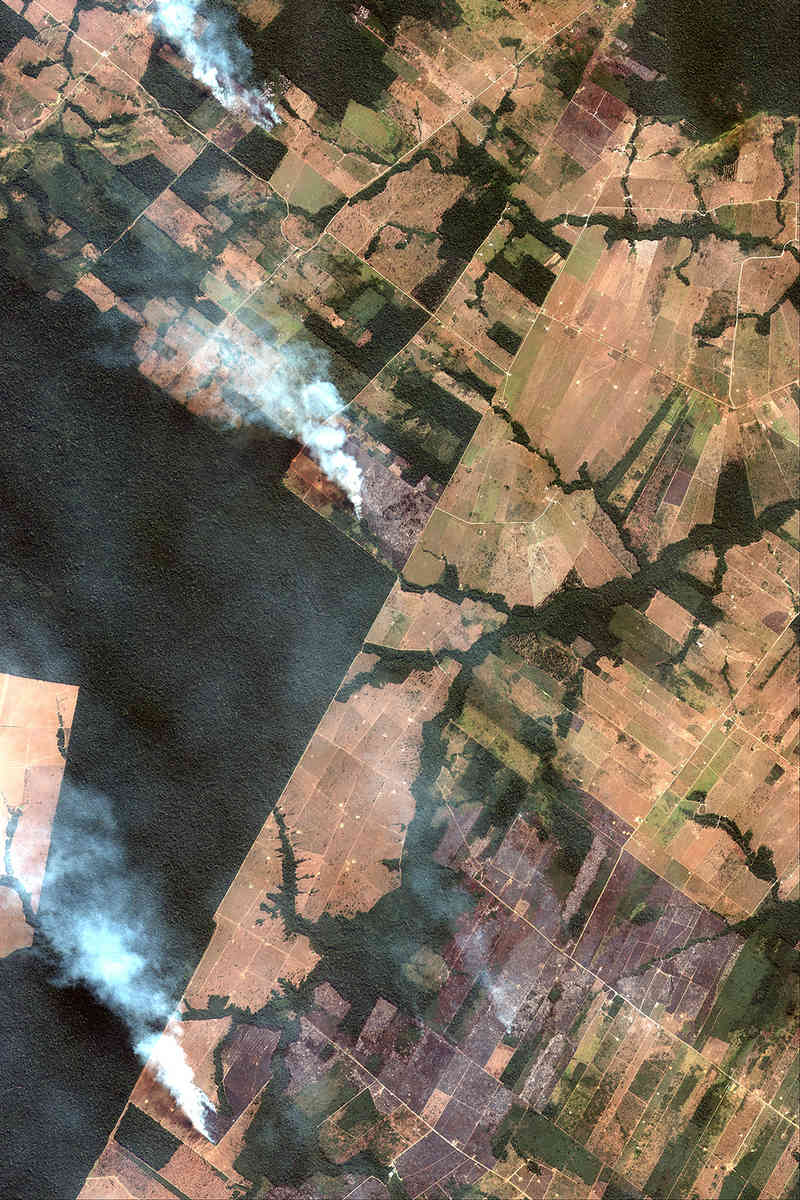 The majority of the agricultural land currently in use in Brazil’s Amazon region was created through years of deforestation.

“Most of this is land use that has replaced rain forest,” said Matthew Hansen, who is a co-leader of the Global Land Analysis and Discovery laboratory at the University of Maryland.

“Brazil has turned certain states like Mato Grosso into Iowa,” said Mr. Hanson, referring to the Brazilian state on the southern edge of the Amazon region. “You’ve got rain forest, and then there’s just an ocean of soybean.”

The grid of maps below shows the month-by-month pattern of fires across the Amazon rain forest in Brazil each year since 2001. The increase in fires every August to October coincides with the season when farmers begin planting soybean and corn. 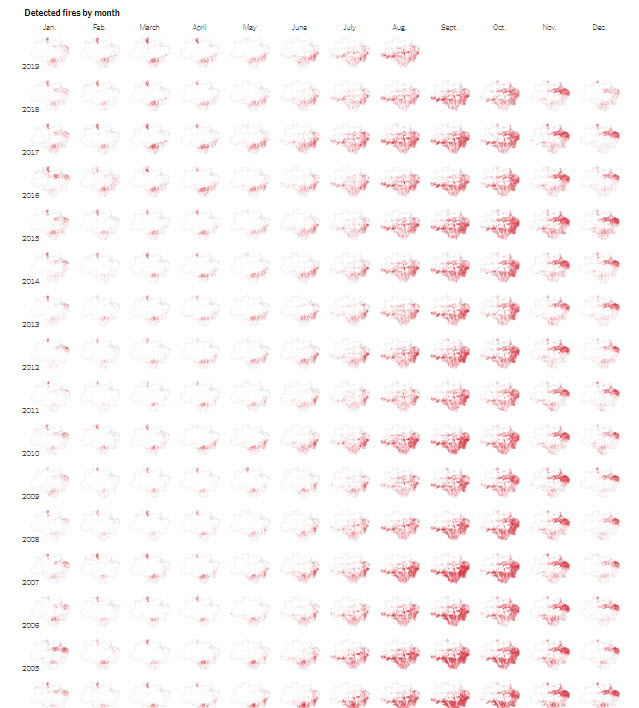 These maps were created using current and historical data from two NASA satellites, Terra and Aqua, which can detect the infrared radiation emitted by fires. 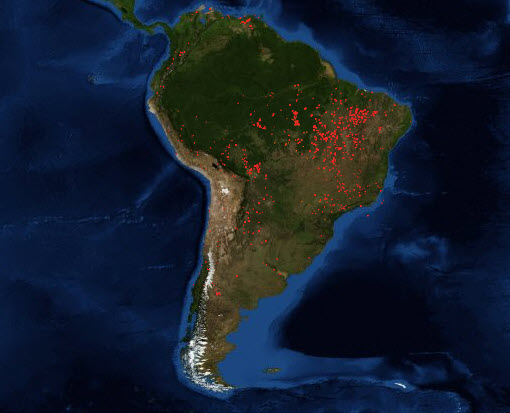 The maps below compare the areas that burned in August this year with an average of the areas burned during the same month in the previous five years.

Scientists at Brazil’s National Institute of Space Research calculated that there were 35 percent more fires so far this year than in the average of the last eight years. 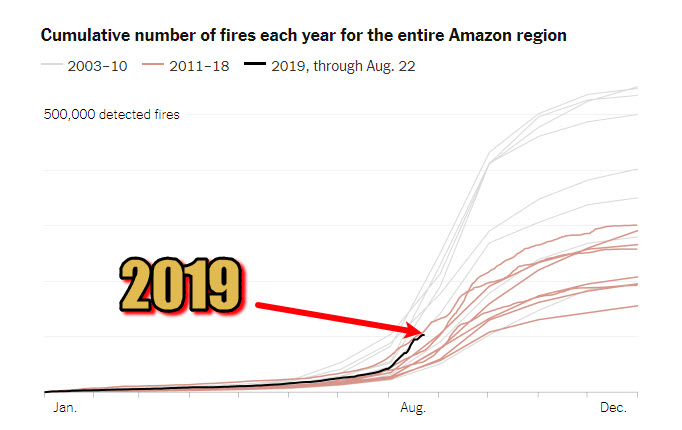 “Fires are not a natural phenomenon in these forests,” said Mark Cochrane, an expert on wildfire and ecology at the University of Maryland. “All of the fires in this region are caused by people.”

Mr. Cochrane noted that while a large majority of the fires were on land that had already been cleared, many others were detected burning with particular intensity. He said these were likely deforestation fires, not just fires for clearing previously deforested land.

“When you slash an area, pile it up, let it dry and then burn it, it burns very intensely, and that’s also what puts off a lot of that smoke,” said Mr. Cochrane.

There has been a rise in deforestation in recent years, after a long period of decline. 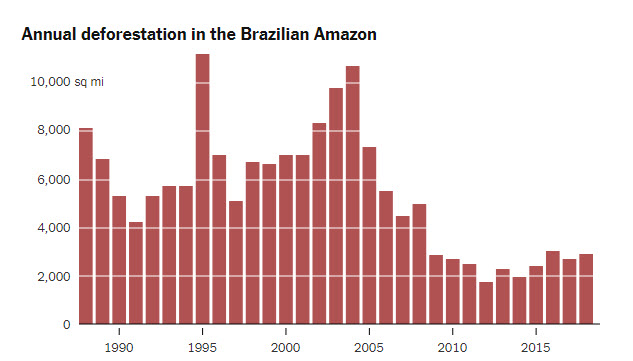 Brazilian President Jair Bolsonaro, who took office on Jan. 1 this year, has been criticized by environmentalists for policies that have increased deforestation.

A New York Times analysis found that enforcement measures to protect against deforestation by Brazil’s main environmental agency fell by 20 percent during the first six months of this year, compared with the same period in 2018.

After days of growing international outrage over the fires, Mr. Bolsonaro reversed course on Friday and said that he would mobilize the military to enforce environmental laws and to help contain the fires.

Fire activity in the Amazon varies considerably from year-to-year and month-to-month, driven by changes in economic conditions and climate. August 2019 stands out because it has brought a noticeable increase in large, intense, and persistent fires burning along major roads in the central Brazilian Amazon, explained Douglas Morton, chief of the Biospheric Sciences Laboratory at NASA’s Goddard Space Flight Center. While drought has played a large role in exacerbating fires in the past, the timing and location of fire detections early in the 2019 dry season are more consistent with land clearing than with regional drought.

“Satellites are often the first to detect fires burning in remote regions of the Amazon,” Morton said. NASA’s primary tool for fire detections since 2002 has been the Moderate Resolution Imaging Spectroradiometer (MODIS) instruments on the Terra and Aqua satellites.

At this point in the fire season, MODIS active fire detections in 2019 are higher across the Brazilian Amazon than in any year since 2010. The state of Amazonas is on track for record fire activity in 2019.

Morton noted that 2019 fire activity statistics distributed by NASA and Brazil’s Instituto Nacional de Pesquisas Espaciais (INPE) are in agreement. “INPE also uses active fire data from NASA’s MODIS sensors to monitor fire activity in the Brazilian Amazon,” Morton said. “As a result, NASA and INPE have the same estimates of changes in recent fire activity. MODIS detections are higher in 2019 than at this time last year in all seven states that comprise the Brazilian Amazon.”

MODIS fire detections are analyzed by the Global Fire Emissions Database (GFED) project, which includes Morton and colleagues from NASA Goddard, the University of California, Irvine, and Vrije Universiteit Amsterdam. Over the years, the GFED team has processed 17 years of NASA satellite data to better understand the role of fire for changes in the Earth system. Their analysis of the southern Amazon includes parts of Brazil, Peru, and Bolivia that typically see fires between July and October. Their data plots are available online here.

These plots show cumulative active fire detections from MODIS and the Visible Infrared Imaging Radiometer Suite (VIIRS) on Suomi NPP through August 22, 2019. The data confirm that 2019 is the highest fire year since 2012 (the start of the VIIRS record) across the seven states that comprise the Brazilian Amazon. In addition, fires in 2019 are more intense than in previous years, as measured in terms of cumulative fire radiative power.

On August 19, 2019, the MODIS instrument on NASA’s Terra satellite captured a natural-color image (top of the page) that shows fires burning in the vicinity of Novo Progresso in the Brazilian state of Pará. The town is located along BR-163, a straight north-south highway that connects farmers in the southern Amazon with an ocean-going port on the Amazon river in Santarém. Pasture and croplands are clustered around the highway in ordered, rectangular plots. To the west of the highway, winding roads connect a series of small-scale mines that extend deep into the rainforest.

The map above shows active fire detections in Brazil as observed by Terra and Aqua MODIS between August 15-22, 2019. The locations of the fires, shown in orange, have been overlain on nighttime imagery acquired by VIIRS. In these data, cities, and towns appear white; forested areas appear black; and tropical savannas and woodland (known in Brazil as Cerrado) appear gray. Note that fire detections in the Brazilian states of Pará and Amazonas are concentrated in bands along the highways BR-163 and BR-230.

Since 2003, MODIS sensors on NASA’s Aqua and Terra satellites have made daily observations of thermal anomalies (usually fires) around the world. The fire detection map on this page is based on data from the Fire Information for Resource Management System(FIRMS), a product developed by the University of Maryland and NASA’s Applied Sciences Program. FIRMS provides near-real-time fire information to natural resource managers and researchers. Note that each point on the map does not necessarily correspond to one fire on the ground. Active fire detections represent the center of a 1 square kilometer area with one or more thermal anomalies. Sometimes one continuous fire can be recorded as multiple anomalies arranged in a line, representing a fire front. 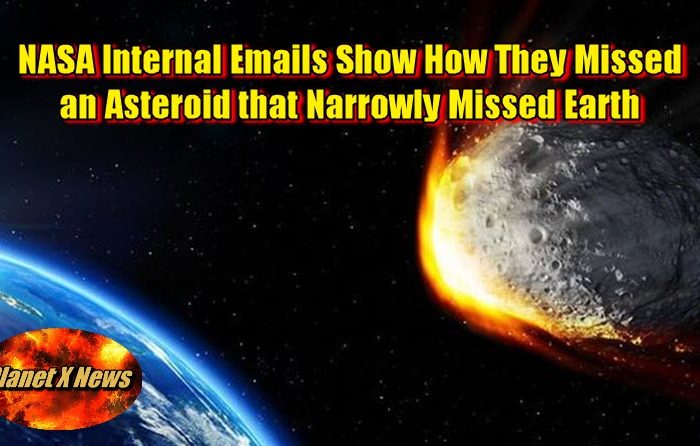 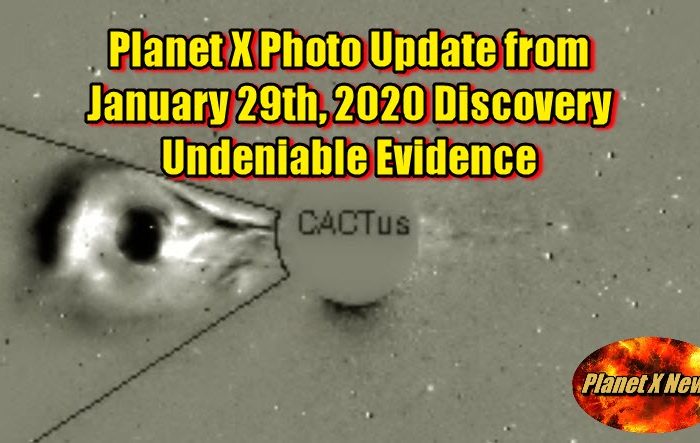 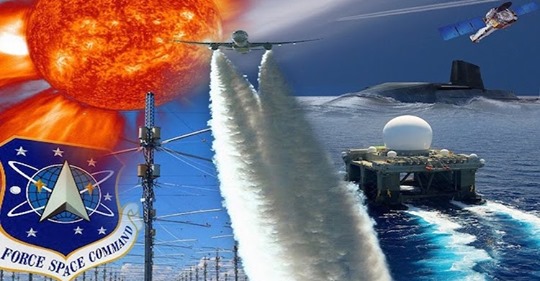 Operation Cloverleaf: The Most Dangerous Weapons Testing Program in History 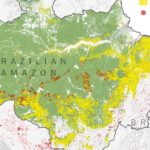