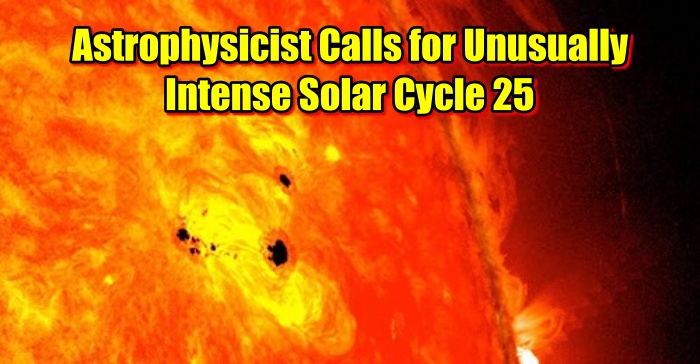 When the chips are down and a big storm is brewing on Earth, odds are that forecasters are predicting close to the same thing. 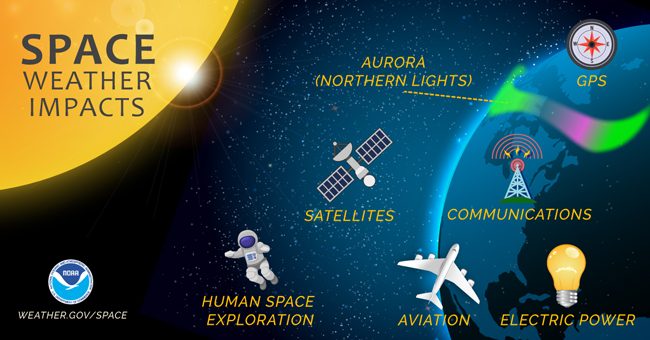 But when it comes to space weather and storms that flare up on the surface of the sun, that’s not always the case. The sun has begun a new 11-year cycle, and scientists have very different ideas on just how much energy will be available to fuel its eruptions.

The consensus view of an international panel of 12 scientists calls for the new cycle, Solar Cycle 25, to be small to average, much like its predecessor, Solar Cycle 24.

But a prominent astrophysicist at the National Center for Atmospheric Research, Scott McIntosh, foresees the sun going gangbusters. The cycle is already off to a fast start, coinciding with the recent publication of McIntosh’s paper in Solar Physics. The study, with contributions from several of his colleagues, forecasts the nascent sunspot cycle to become one of the strongest ever recorded.

The weather on the sun matters because solar outbursts can unleash radiation into the Earth’s atmosphere that is dangerous for air travelers; interfere with spacecraft and satellites; and, in a worst-case scenario, inflict significant damage on Earth’s power grids.

The forecasts for the new solar cycle, which are so divergent, regard the number of sunspots that the sun will cook up over the coming 11 years. Sunspots are like bruises on the surface of the sun, cooler discolorations that throb and pulsate.

Forecasting sunspots is important, since “coronal mass ejections” that originate from them can send disruptive bursts of magnetic energy toward the Earth.

The number of sunspots crowding the solar disk at one time varies significantly over the course of the solar cycle. During solar minimum — which we’re emerging from right now — weeks can pass without a single sunspot. In fact, 206 days in 2020 (or 58 percent of the year) haven’t featured any Earth-facing sunspots.

But at the peak of a solar cycle, the average monthly sunspot number ranges from 140 to 220.

An international panel co-chaired by scientists from NOAA and NASA, which featured six U.S. solar scientists and half a dozen from abroad, is anticipating a similarly quiet cycle 25.

They’re calling for that peak to occur in July 2025, give or take about eight months.

But McIntosh, who is now NCAR’s deputy director and previously directed its High Altitude Observatory, estimates a sunspot number more than double what the joint panel is predicting.

The panel’s prediction: A quiet cycle

The scientists on the Solar Cycle 25 Prediction Panel produced their outlook by reviewing and vetting a number of predictions across the solar science and astrophysics community. Among them is Doug Biesecker, the panel’s co-chair and a scientist at NOAA’s Space Weather Prediction Center.

Among the diverse panel, different ideas were discussed and debated. Disagreements often stemmed from the state of the science, Biesecker explained, and how poorly understood the underlying physics of the sun are.

“We concluded it would be similar in strength to the cycle that’s just died,” said Gordon Petrie, a scientist at the National Solar Observatory. “This is a comparatively weak number. [Cycle 23] was about 50 percent stronger than [cycle 24], and going back to the 1950s, the cycles were much stronger [still.]”

The lone wolf with a shocking forecast

In stark contrast to the panel’s forecast are the prophecies of McIntosh, who anticipates that the upcoming solar cycle could be the most active in half a century. He has developed a prediction technique that foreshadows a coming period of solar volatility.

“If the relationship, [which] was developed off 24 cycles, holds, the number [of sunspots] coming out is double what the consensus prediction was from the various panel members was,” McIntosh said.

His group pinned their forecast at “233 [sunspots] with error bars” during the peak of Solar Cycle 25.

“And those error bars are not huge,” McIntosh added. “The data just smacks you in the face.”

Why the forecasts matter

Predicting discolorations on the surface of a star 93 million miles away might seem like an abstract art, but it’s actually a vital exercise. That’s because the Earth is susceptible to “space weather,” or the effects of “storms” launched from the sun. The storms hurl high-energy particles toward the Earth, along with intense spurts of magnetic energy.

That can have a pretty visible manifestation in the form of the aurora borealis and australis, but other impacts can be much more severe.

“Big [solar] cycles cause things to fall out of low Earth orbit more quickly,” explained Biesecker. That can be problematic for satellites, which are integral for global economies and commerce. “[Energy from solar storms can] heat up the [thermosphere, or upper atmosphere], and that heating basically results in increased density at satellite orbit altitudes.”

That, in turn, slows down the satellites, sometimes to the point of knocking some out of orbit.

This can be problematic too because decades’ worth of satellite launches have cluttered the extreme outer atmosphere with defunct leftovers and space junk. Without drag to scour out the extraterrestrial rubbish, the risk of an operable satellite being damaged by a collision climbs.

The solar storms can disrupt or destroy the electronics onboard satellites if precautions aren’t taken. A big storm, and “you’ll literally see satellites frying,” McIntosh warned. “They cut corners on shielding.”

And the biggest events have even knocked out electrical grids on the ground before — though episodes of that magnitude are rare. On March 12, 1989, a solar storm brought the northern lights as far south as Cuba and Florida, while knocking out power to a large swath of Quebec.

The episode paled in comparison to the infamous Carrington Event, which brought the planet’s biggest geomagnetic storm on record in early September 1859. Telegraph wires fried, while the northern lights could be seen across the entire Lower 48.

In 2013, researchers in the United Kingdom published a paper estimating that a similar storm today could cost the U.S. trillions of dollars, slashing the country’s GDP by up to 15 percent. Some even speculate that a solar storm of that magnitude would bring the world’s economy to a screeching halt, with electrical service restoration taking months.

Solar storms can also boost how much solar radiation passengers and crew onboard commercial flights near the poles are exposed to, at times reaching dangerous levels. Airlines sometimes reroute their flights if they have advance notice.

By understanding the current magnetic structure and field strength of the sun, it’s possible for solar physicists to make forward-looking predictions of sunspot numbers. The science is still in its early stages at best, with a few main techniques for estimation.

“It’s not a mature branch of science, I have to say,” Petrie said. “We have a set of … calculations that guide us.”

Scientists have found a link between how much magnetic energy pours out of the sun at solar minimum and the number of sunspots that form later in the cycle.

Another method of prediction focuses on observed motion and visible signatures on the sun’s surface.

McIntosh has taken an entirely different approach in his strategy. And he thinks it could be revolutionary.

“Up until a couple of years ago, I was watching the slow decline of solar activity over the last 30 years, and kind of jumped on the bandwagon that year that’s going to continue,” McIntosh said. “But then we did some work about 18 months ago.”

McIntosh has set about trying to figure out how the sun’s “internal magnetic machine” works. He deduced that there are as many as four main magnetic bands that encircle the sun at any one time. Sunspots, he argues, are the result of interference and overlap between those bands.

McIntosh postulates that there may not be just one cycle that accounts for sunspot activity but, in fact, several, connected to one of those four main magnetic bands. He thinks they all overlap in different ways, their peaks slightly misaligned. The frequency of sunspots we see is the product of how those subcycles interact.

McIntosh enlisted the help of plasma fusion scientists to review past data and come up with the math to predict what sunspot patterns may arise in the years ahead.

Only time will tell if McIntosh’s predictions for an active Solar Cycle 25 are borne out. He says “the proof is in the pudding.”

For now, the panel has remained quiet about his research, but McIntosh says that — if his predictions are realized — the field will have a lot of work to do.

“This work is pointing in a direction which says much of the past physics isn’t quite right,” he said. “If we’re right, it points to a quite different way in how the sun works.” 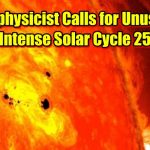